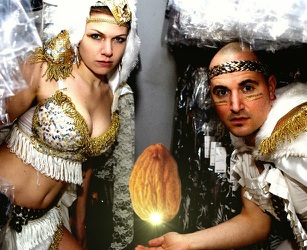 The History of the Lost Cabaret :
In October 2012 the Artistic Director of The Lost Theatre, London, came across an impressive Canadian comedy performer named Zuma Puma. Consequently, Puma was invited to produce/compere their weekly Cabaret Event in Stockwell. Their first ever Cabaret was inspired by Zuma's studies at L'Ecole Philippe Gaulier in Paris France, a school that encourages new works by challenging their students to take risks on the stage finding beauty and freedom in performance through improvisation and texts. When she finished her studies Zuma hoped she could find a platform  for artists to regularly take to the stage and develop their material in front of live audiences. Since the Fall of 2012 The Lost cabaret has grown into becoming home turf for many alternative comedians and a safe environment to develop material to take out into the world. In February 2013, Zuma teamed up with Adam Taffler a gifted London Cabaret Comedian and together they ran the Lost Cabaret developing their double act Almond Roca and touring their full length show to a variety of UK festivals including Wild Heart, The Roll Right Fayre, Buddhafields and The Edinburgh Fringe Festival. Upon returning to London in September 2013, Zuma continued to compere The Lost Cabaret solo as Adam committed to his successful work in Theatre and events Production founding Adamotions.

In 2016 Zuma handed over hosting to cohorts Annie Bashford & Nathan Lang. These two experienced comedians keep the bizarre spirit of The Lost Cabaret alive, hosting in new characters every month and welcoming more acts than ever before!

​These days you can seek out an incredible variety of performances, from clown to character to puppetry to undefinable alternative feats by performers from all over the world. One thing for certain is that The Lost Cabaret provides an informal, unpretentious experience in London's alternative comedy scene.
Every year The Lost Cabaret makes a summer appearance on the UK festival circuit... With so much to offer...
This wild outrageously fun and silly cabaret is available for bookings at your festival.  We've got a team of highly experienced and skilled clown and character comedians with up to 3 nights of laughter and hours of material.

Festival Offerings: We've got all the goodies to make your festival greater than GREAT!

* Clown Life- Clown/ personal development intensive teasers of 1-2 hours-  "Experience a lot of fun" (www.clownlife.org)* for more info check out our workshop link at the top of the page or visit clownlife.org


For more info get in touch... We'd love to appear at your festival and bring all the goodness we've got!
​​Great News!

After 2 years of hard work it was well earned with both of these selections and we're very happy to have taken part in such fun web series celebrations.